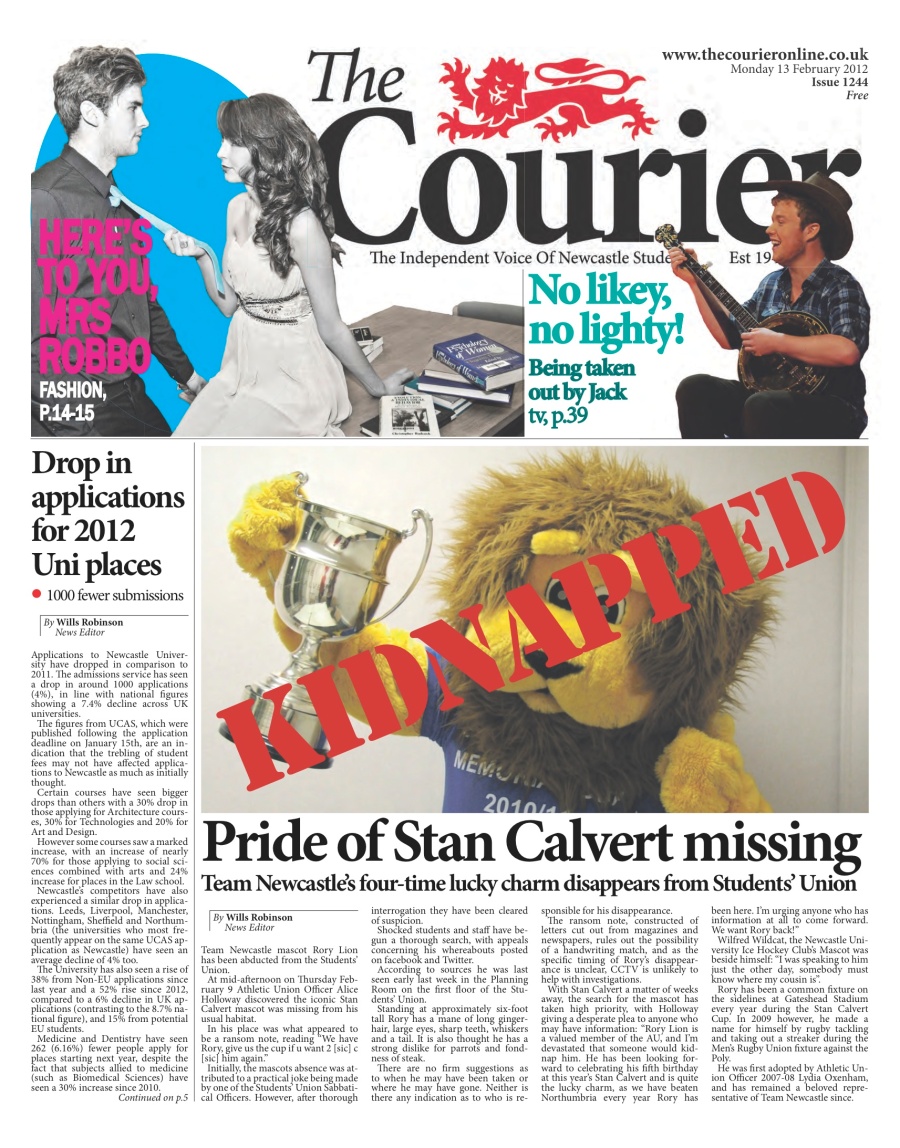 Team Newcastle mascot Rory Lion has been abducted from the Students’ Union.

At mid afternoon on Thursday February 9 Athletic Union Officer Alice Holloway discovered the iconic Stan Calvert mascot was was missing from his usual habitat.
In his place was what appeared to be a ransom note, reading “We have Rory, give us the cup if u want 2 [sic] c [sic] him again.”
Initially, the mascots absence was attributed to a practical joke being made by one of the Students’ Union Sabbatical Officers, however, after thorough interrogation they have been cleared of suspicion.
Shocked students and staff have begun a thorough search, with appeals concerning his whereabouts posted on facebook and Twitter.
According to sources he was last seen early last week in the Planning Room on the first floor of the Students’ Union.
Standing at approximately six-foot tall Rory has a mane of long ginger-hair, large eyes, sharp teeth, whiskers and a tail. It is also thought he has a strong dislike for parrots and fondness of steak.
There are no firm suggestions as to when he disappeared or where he may have gone and neither is there any indication as to who is responsible for his disappearance. The ransom note, constructed of letters cut out from magazines and newspapers, rules out the possibility of a handwriting match, and as the specific timing of Rory’s disappearance is unclear, CCTV is unlikely to help with investigations.
With Stan Calvert a matter of weeks away, the search for the mascot has taken high priority, with Holloway giving a desperate plea to anyone who may have information: “Rory Lion is a valued member of the AU, and I’m devastated that someone would kidnap him. He has been looking forward to celebrating his fifth birthday at this year’s Stan Calvert and is quite the lucky charm, as we have beaten Northumbria every year Rory has been here. I’m urging anyone who has information at all to come forward. We want Rory back!”
Wilfred Wildcat, the Newcastle University Ice Hockey Club’s Mascot was beside himself: “I was speaking to him just the other day, somebody must know where my cousin is”.
Rory has been a common fixture on the sidelines at Gateshead Stadium every year during the Stan Calvert Cup. In 2009 however, he made a name for himself by rugby tackling and taking out a streaker during the Men’s Rugby Union fixture against the Poly.
He was first adopted by Athletic Union Officer 2007-08 Lydia Oxenham, and has remained a beloved representative of Team Newcastle since.

Error: Twitter did not respond. Please wait a few minutes and refresh this page.